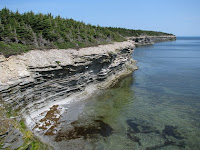 Quebec island a window on Earth's second-largest extinction
Postmedia News: Canada's historic Anticosti Island has produced the first clear evidence that the planet's second-largest mass extinction -- the sudden disappearance of 75% of all marine species on Earth about 450 million years ago -- was caused by a rapid, five-degree plunge in ocean temperatures. The discovery on the large Quebec island was reported just days after another team of scientists pointed to ash deposits on Axel Heiberg Island in the Canadian Arctic as proof that the planet's biggest extinction event -- when 95% of all life died out 250 million years ago -- was linked to volcano-fed coal fires in ancient Siberia.
Anticosti Island, located in the Gulf of St. Lawrence and first described by French explorer Jacques Cartier during his 1534 voyage of discovery to inland Canada, is widely viewed as a geological treasure. The steep cliffs along the island's shores preserve a fossil-rich record of Earth history from a time when present-day North America was situated around the equator...
Using the alignment of telltale molecules in the animals' preserved shells as a 'paleo-thermometer,' the scientists discovered that a spike in extinctions during the Ordovician era coincided exactly with the sudden cooling of the seas. 'Our study strengthens the case for a direct link between climate change and extinction,' California Institute of Technology researcher Seth Finnegan said in the study overview. Study co-author Woodward Fischer, also a Caltech researcher, noted that 'our observations imply a climate system distinct from anything we know about over the last 100 million years.'
Image source here.
Posted by Jody Aliesan at 3/07/2011 07:40:00 a.m.