Charts of the day: The march of global warming

NASA: Easily the hottest April -- and hottest Jan-April -- in temperature record
Climate Progress: The record temperatures we're seeing now are especially impressive because we've been in 'the deepest solar minimum in nearly a century.'... The overwhelming majority of recent warming went right where scientists had predicted -- into the oceans... There are no permanent weather stations in the Arctic Ocean, the place on Earth that has been warming fastest... Thus it is almost certainly the case that the planet has warmed up more this decade than NASA says.

Paul Krugman: How Will They Spin This?
The NASA-GISS data show that the past 12 months were the hottest 12-month period on record. 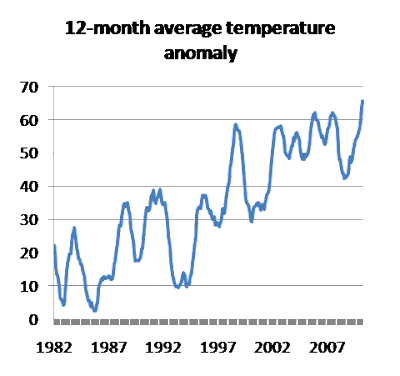