Gulf Spill May Far Exceed Official Estimates
NPR: The amount of oil spilling into the Gulf of Mexico may be at least 10 times the size of official estimates... Findings suggest the BP spill is already far larger than the 1989 Exxon Valdez accident in Alaska.
Size of Oil Spill Underestimated, Scientists Say
NYT: BP later acknowledged to Congress that the worst case, if the leak accelerated, would... dump a plume the size of the Exxon Valdez spill into the Gulf every four days.
Updated Oil Spill Counter 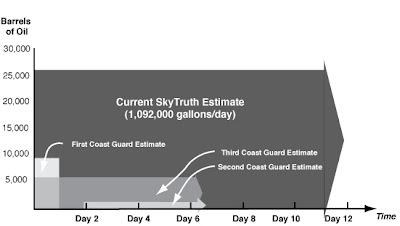 Where's the oil?
Dan Froomkin: Nobody really knows where it is, or where it's headed... Some scientists suspect that a lot, if not most, of the oil is lurking below the surface rather than on it, in a gigantic underwater plume the size and trajectory of which remain largely a mystery.
IMAGES: 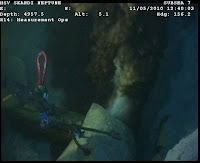 The Gulf of Mexico Oil Spill from Space (Natural Colours) 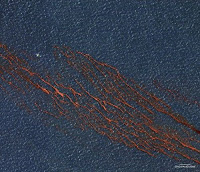