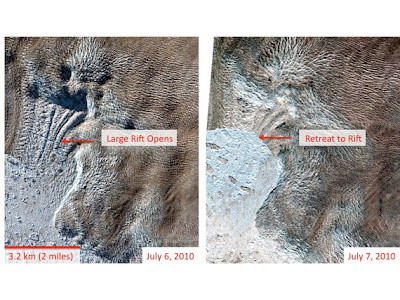 NASA: NASA-funded researchers monitoring Greenland's Jakobshavn Isbrae glacier report that a 7 square kilometer (2.7 square mile) section of the glacier broke up on July 6 and 7, as shown in the image above. The calving front -- where the ice sheet meets the ocean -- retreated nearly 1.5 kilometers (a mile) in one day and is now further inland than at any time previously observed. The chunk of ice lost is roughly one-eighth the size of Manhattan Island, New York...
Jakobshavn Isbrae is located on the west coast of Greenland at latitude 69N and has retreated more than 45 kilometers (27 miles) over the past 160 years, 10 kilometers (6 miles) in just the past decade. As the glacier has retreated, it has broken into a northern and southern branch. The breakup this week occurred in the north branch.
Scientists estimate that as much as 10 percent of all ice lost from Greenland is coming through Jakobshavn, which is also believed to be the single largest contributor to sea level rise in the northern hemisphere.
Jakobshavn Glacier Retreat (more images at this link)
Earth Observatory: In 2001, Jakobshavn was already the fastest glacier in the world, flowing from land to sea at 7 kilometers per year. By July 2010, it had accelerated to roughly 15 kilometers per year...
When an ice tongue such as the Jakobshavn calves, the glacier feeding that ice tongue typically accelerates. Reduced friction between the intact glacier and the bedrock, and reduced buoyancy from the seawater (which partially offsets the glacier's downhill flow) mean less resistance to glacier movement... In 2000, Jakobshavn flowed at roughly 9,400 meters per year. By 2003, it had accelerated to 12,600 meters per year. Jakobshavn's current speed of flow is about 15,000 meters per year.
Warming conditions in the Arctic contribute to glacier acceleration in multiple ways. Warmer conditions can send meltwater to the glacier's base, increasing lubrication and consequently glacier speed... Warm winters... may allow iceberg calving and high flow rates to continue.
Image source here.
Posted by Jody Aliesan at 7/17/2010 10:37:00 a.m.