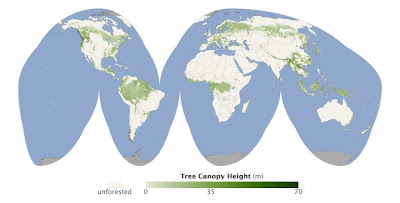 View larger image with zoom option.
NASA Earth Observatory: A first-of-its kind global map shows forest canopy height in shades of green from 0 to 70 meters (230 feet). For any patch of forest, the height shown means that 90 percent or more of the trees in the patch are that tall or taller. Areas without forest are shown in tan.
The new map shows the world's tallest forests clustered in the Pacific Northwest of North America and portions of Southeast Asia, while shorter forests are found in large swaths across northern Canada and Eurasia. The map depicts average height over 5 square kilometers (1.9 square miles), not the maximum heights that any one tree or small patch of trees might attain.
Temperate conifer forests -- which are extremely moist and contain massive trees such as Douglas fir, western hemlock, redwoods, and sequoias, have the tallest canopies, soaring earily above 40 meters (131 feet). In contrast, boreal forests dominated by spruce, fir, pine, and larch had canopies typically less than 20 meters (66 feet). Relatively undisturbed areas in tropical rain forests were about 25 meters (82 feet), roughly the same height as the oak, beeches, and birches of temperate broadleaf forests common in Europe and much of the United States.
Scientific interest in the new map goes far beyond curiosities about tree height. The map has implications for an ongoing effort to estimate the amount of carbon tied up in Earth's forests... There are hints that young forests absorb more carbon than older ones, as do wetter ones, and that large amounts of carbon end up in certain types of soil. But ecologists have only begun to pin down the details as they try to figure out whether the planet can continue to soak up so much of our annual carbon emissions and whether it will continue to do so as climate changes.
Image source here.
Posted by Jody Aliesan at 7/23/2010 09:33:00 a.m.