The Eagle landed, thanks to Canadians 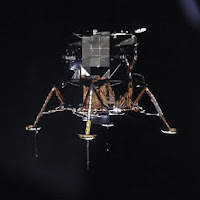 Canadians played integral part in getting Apollo 11 crew to moon -- and back
The Canadian Press: When the world marks the 40th anniversary Monday of [the] first landing on the moon, it will be paying tribute to American ingenuity and what is arguably one of that country's finest moments. But it was one of Canada's proudest moments, too.
Many Canadians are unaware that a group of their countrymen working at NASA was instrumental in delivering the Apollo 11 astronauts to the lunar surface on July 20, 1969 -- and getting them safely back home to Earth.
In fact, even before Neil Armstrong's booted feet stepped onto the rocky, crater-pocked surface of the moon, Canadian-made legs on the lunar landing module had settled into the satellite's dust first. The splayed legs were produced using a honeycomb design by Quebec's Heroux-DEVTEK, which won the NASA contract.
The landing module was primarily designed by Sarnia, Ont.-born Owen Maynard, an engineer who worked on the famed Avro Arrow before the federal government under Diefenbaker abruptly cancelled the supersonic jet program in February 1959.
Maynard and about 25 others laid off from Toronto's A.V. Roe aircraft on what was dubbed Black Friday were quickly snapped up by the Americans to help them fulfill President John F. Kennedy's 1961 edict that the country land a man on the moon within the decade.
'Canadians contributed a massive amount to the space race and Apollo,' says Robert Godwin, a curator for the Canadian Air and Space Museum in Toronto... 'Very few know about it,' says the British-born Godwin, who has lived in Canada for 31 years. 'I think that Canadians are very low-key about their accomplishments and they shouldn't be, because Canadians have done things that people in the rest of the world have never done.'
Image source here.
Posted by Jody Aliesan at 7/19/2009 06:28:00 a.m.