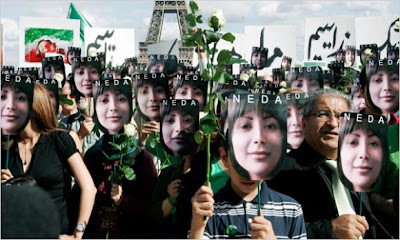 Strong Words From Iran's Opposition
New York Times: Mr. Moussavi and other opposition leaders have asked permission [which was denied] to hold a public mourning ceremony for the dead on Thursday. That day has great symbolic importance, because it is 40 days after the shooting of Neda-Agha-Soltan, the young woman whose death ignited widespread outrage in Iran and beyond. Commemorating the 40th day after a person's death is an important mourning ritual in Shiite Islam; similar anniversaries for dead protesters were essential in the demonstrations that led to the Islamic Revolution in 1979.
Iran's Protesters: Phase 2 of Their Feisty Campaign
Time: Phase 2 has begun. Six weeks after millions took to the streets to protest Iran's presidential election, their uprising has morphed into a feistier, more imaginative and potentially enduring campaign. The second phase plays out in a boycott of goods advertised on state-controlled television... It includes calls to switch on every electric appliance in the house just before the evening TV news to trip up Tehran's grid. It features quickie 'blitz' street demonstrations, lasting just long enough to chant 'Death to the dictator!' several times but short enough to evade security forces. It involves identifying paramilitary Basij vigilantes linked to the crackdown and putting marks in green -- the opposition color -- or pictures of protest victims in front of their homes. It is scribbled antiregime slogans on money. And it is defiant drivers honking horns, flashing headlights and waving V signs at security forces.
The tactics are unorganized, largely leaderless and only just beginning. They spread by e-mail, websites and word of mouth. But their variety and scope indicate that Iran's uprising is not a passing phenomenon... Iranians are rising above their fears... Today's public resolve is reminiscent of civil disobedience in colonial India before independence or the American Deep South in the 1960s. Mohandas Gandhi once mused that 'even the most powerful cannot rule without the cooperation of the ruled.' That quotation is now popular on Iranian websites... The public is defining its own agenda, with Rafsanjani, Mousavi and other opposition figures responding to sentiment on the street rather than directing it. After meeting on July 20 with the families of people detained following the election, Mousavi warned the power structure, 'You are facing something new: an awakened nation, a nation that has been born again and is here to defend its achievements.'
Image source here.
Posted by Jody Aliesan at 7/29/2009 10:57:00 a.m.