'Supermoon' to loom large on Saturday 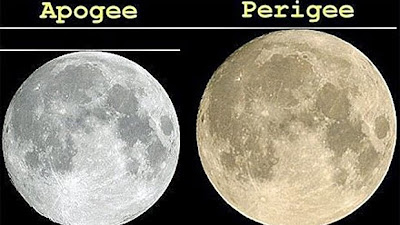 CBC News: Earth's closest celestial neighbour will appear to loom larger and brighter than usual on Saturday night, as astronomers anticipate a cosmic event called an 'extreme supermoon.' Scientists say the natural phenomenon -- in which the moon reaches its closest point to this planet -- will cause abnormally high and low tides worldwide.
The occurrences, technically known as 'lunar perigees,' were previously visible in 1955, 1974, 1992 and 2005. But what makes this one particularly special is that it coincides with a full moon, which hasn't happened since 1993... The full moon should appear to be about 15 per cent larger and up to 30 per cent brighter than usual on Saturday evening... Stargazers are advised to check it out around sunset, when it's closest to the horizon.
The average distance between the Earth and the moon is about 383,000 kilometres. The full moon on March 19 will be about 356,000 kilometres away.
Image source here.
Posted by Jody Aliesan at 3/19/2011 07:19:00 a.m.