From space: How 'green' is the Earth?

Thirteen Years of Greening from SeaWiFS 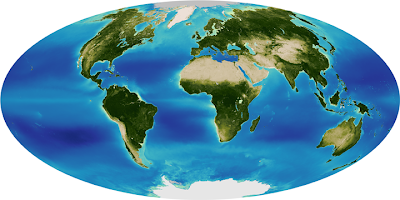 To enlarge image, go here.
Earth Observatory: From 1998 to 2010, the Sea-viewing Wide Field-of-View Sensor, or SeaWiFS, made a simple but elegant measurement: how 'green' is the Earth. That is, how much chlorophyll -- the pigment that helps turn sunlight into organic energy for plants -- is present in the seas and on land. Those measurements offered a window into the planet's ability to support life. The long, well-calibrated data record also gives scientists one of the best benchmarks to study the planet's biological response to a changing environment.
The image above shows SeaWiFS data as a global average over the entire 13-year record. For the oceans, the colors represent the concentration of chlorophyll and indicate where phytoplankton most often bloomed since 1998. On the land, data are depicted as a Normalized Difference Vegetation Index (NDVI), which shows the density of green vegetation. An NDVI of zero means no green plants and a high value (0.8 of 0.9) is a thick canopy of green leaves.
Posted by Jody Aliesan at 4/14/2011 08:16:00 a.m.