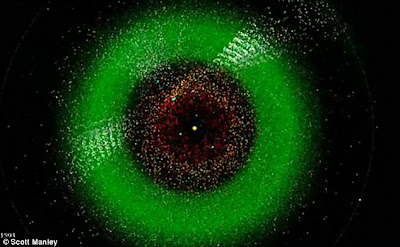 Huffington Post: Two white numbers in the lower left-hand corner of the video indicate the year and the number of asteroids known to scientists at that time. Meanwhile, the animation shows the location of these asteroids within the solar system. As the years pass, new discoveries are highlighted briefly in white. 'Earth Crossers' are shown in red. 'Earth Approachers' are in yellow, and other asteroids are shown in green.
In 1980, according to the video, there were only 8,954 known asteroids. By 1990, that number had grown to over 14,000. The YouTube user who uploaded the video explains the new discoveries that took place throughout the 1990s: 'As the video moves into the mid 1990s we see much higher discovery rates as automated sky scanning systems come online. Most of the surveys are imaging the sky directly opposite the sun, and you'll see a region of high discovery rates aligned in this manner.'
Inner solar system planets Mercury, Venus, Earth and Mars orbit at the centre of the video. Now and then Jupiter, the next planet outside the asteroid belt, moves through the corners of the screen.
Story with explanatory stills in The Daily Mail.
Posted by Jody Aliesan at 8/31/2010 12:55:00 p.m.