'The whole damn mountain had fallen down' 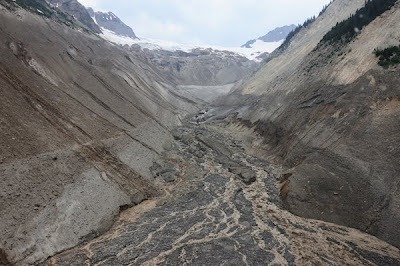 These slopes channeled the runout and are completely stripped. [Caption and photo: D. Steers.]
Stunning Photos of Massive Meager Slide
Rescue worker David Steers was there to save hikers, and he took his camera.
The Tyee: It was pitch- black when a roar and a rumble rocked Mt. Meager. These are the unmistakable signs of disaster in a region classified slide-prone. When word of a landslide reached Pemberton, some 70 kilometres south of the Meager region, David Steers was among the first dispatched by helicopter early on Friday, August 6. He and his colleagues with Pemberton search-and-rescue were tasked to reach the disaster site, evaluate the damage and rescue any people. Only later would he learn that the roar in the night had registered a 2.6 on the Richter scale, and would amount to one of the largest landslides in Canadian history...
But it was only when the helicopter turned a bend in the river that the magnitude fully sunk in: the debris field stretched to a vanishing point in the distance. 'People describe being dumbstruck,' he says. 'When we turned that corner, that's the only word for it. We all just sat there staring. Someone occasionally said, 'Wow.' That's about it.' The omens went from bad to worse when the helicopter eventually reached the peak of Mt. Meager, where the slide had originated. 'That's when I realised the whole damn mountain had fallen down.'
What Steers and his colleagues saw on their mission is documented in the incredible series of photos he published to Flickr, a selection of which you can click through and view here. Steers' photos represent the only comprehensive collection of this historical landslide currently available, taken by one of the very first people on the scene.
Posted by Jody Aliesan at 8/24/2010 11:37:00 a.m.